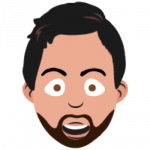 By Richard Branches,
February 21, 2018 in General/Windows