47 replies to this topic

Been having a little fun seeing just how far I can push the current Emby server. There is little chance that my code changes would ever make it into the server, but perhaps they can demonstrate a proof of concept that you folks can discuss and refine and then lobby with the server team. By no means am I suggesting this as a finished product. Simply one example of the kind of enhancements that would benefit emby music users and work for multiple genres.

Marin I know your op was about classical music specifically but my library genre that would most benefit from enhancements is "jazz". I think it was agreed that there were enough commonality between all  genres.

So for background I added "lyrist", "writer" and "performer" person types, built a server rev and gave it a go. My music library is approx. 1500 albums, 16,000 songs and 1000 artists.   With "People Search" back !!! I was encouraged by the results and the flexibility of the server. (always amazed by that)

The track detail is pretty close to what I would want. 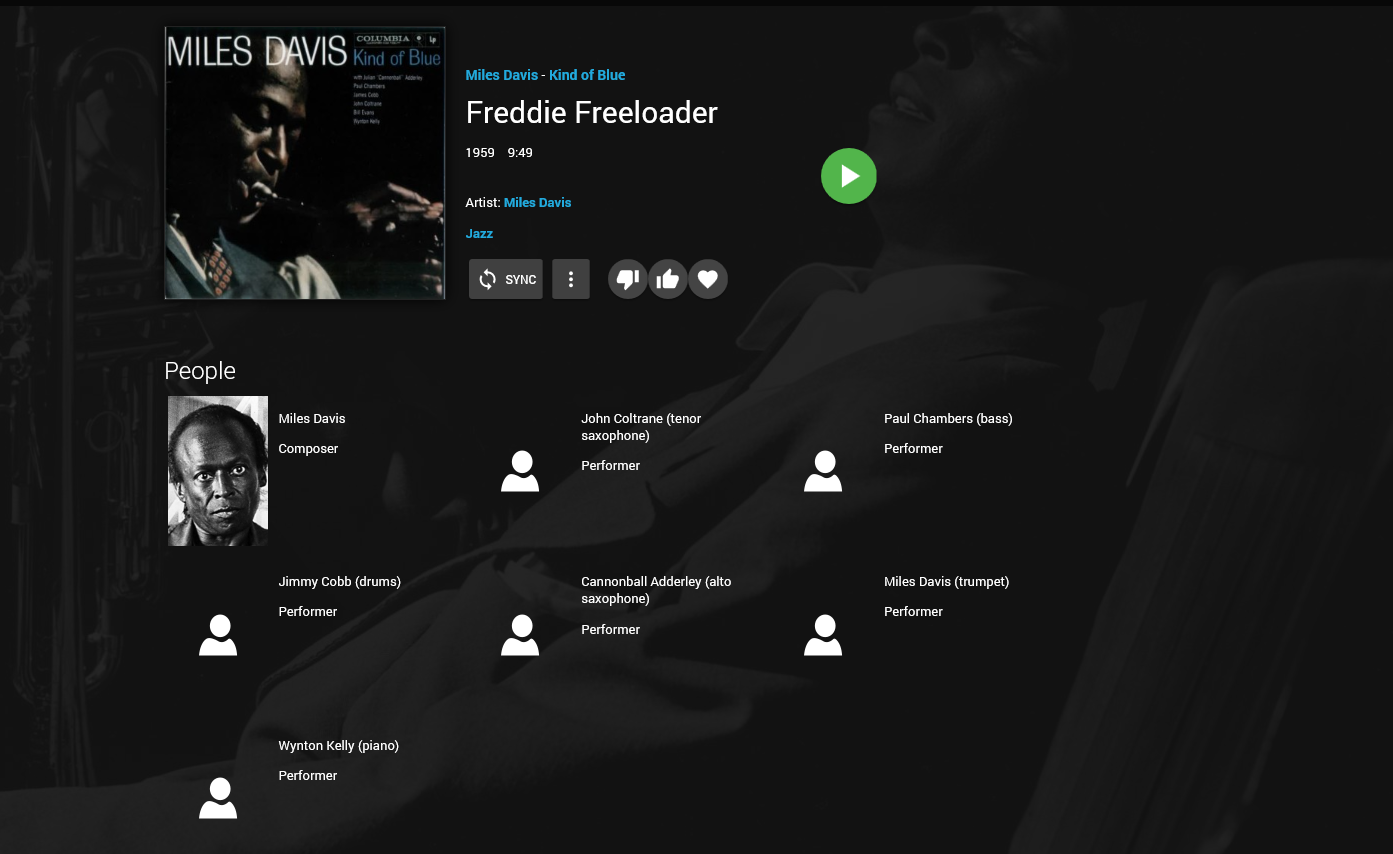 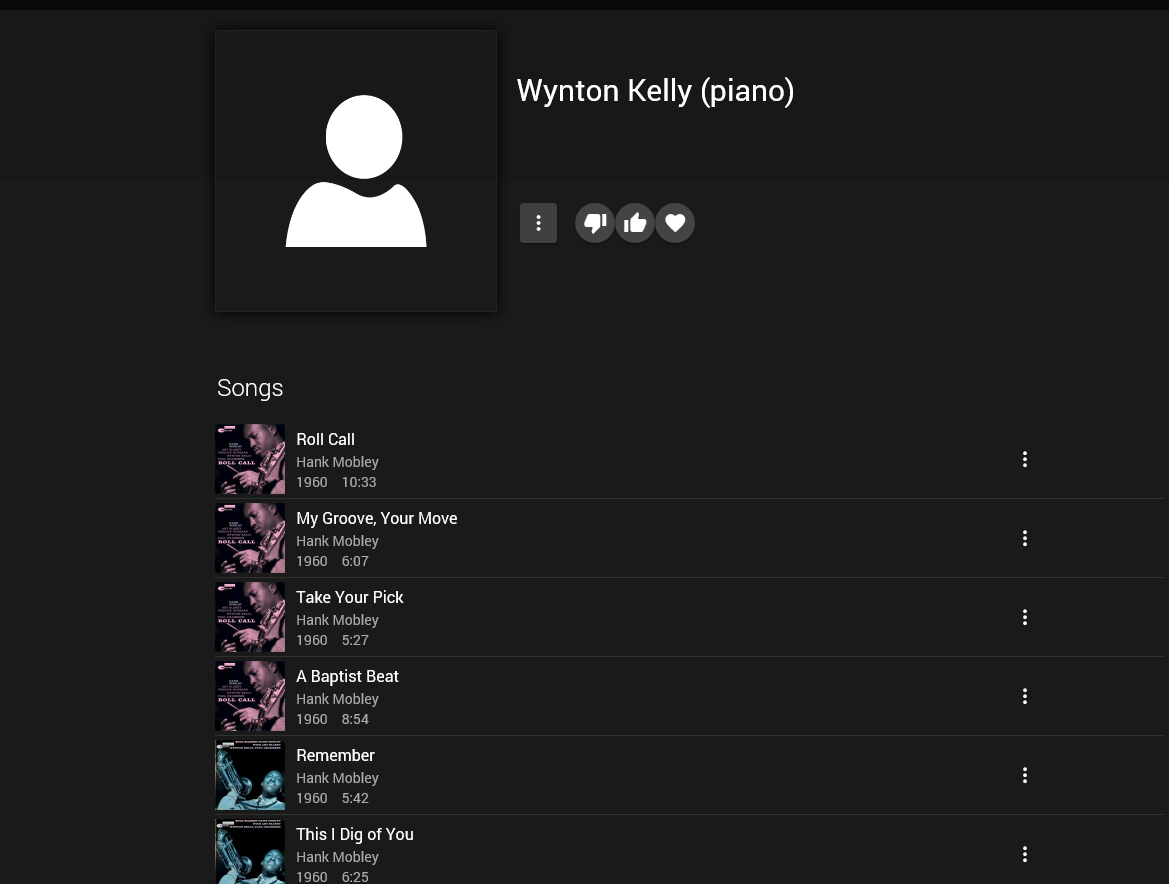 This is where it got fun for me I have "Wynton Kelly" as an artist, but in the jazz world performing credits are almost as important.

Search gets me a pretty good picture. and now a playlist say "Grant Green (guitar)" is going to prove interesting.

Anyway just a starting place for discussion. Not a finished product.

Thank you. This looks fantastic!

Dear Emby-people, what about classical music? Haven't heard any news about for ages..

I would love to see more tag support for classical and jazz.

Currently looking at Emby as a Music Server to possibly replace Plex and Sonos, and thus researching what is possible with Emby, so I took the liberty of reanimating this thread (I hope there aren't too many others, more relevant ones?).

Where might I find those 'composer' and 'conductor' tags?

I saw support was added for the 'composer', 'conductor', 'writer' and 'lyricist' tags. That's really great. Thanks for that!

We don't currently do anything with these tags in Emby, but it's possible for the future. Thanks.

I think it would be better to extend our current music features to accommodate classical. Can you guys offer some suggestions on how we might do that?

I think the best, and probably simplest solution is to support a more complete set of the tags already specified in ID3 and Vorbis.  Below is the list that I came up with.  I referenced the ID3 tag names, but there are Vorbis equivalents for most, if not all.

There are 3 ID3 tags intended for titling tracks.  Below is an excerpt from the ID3 (2.3) spec:

TIT1 The 'Content group description' frame is used if the sound belongs to a larger category of sounds/music. For example, classical music is often sorted in different musical sections (e.g. "Piano Concerto", "Weather - Hurricane").
TIT2 The 'Title/Songname/Content description' frame is the actual name of the piece (e.g. "Adagio", "Hurricane Donna").
TIT3 The 'Subtitle/Description refinement' frame is used for information directly related to the contents title (e.g. "Op. 16" or "Performed live at Wembley").

As an example, consider the following classical composition by Tomaso Albinoni:

Currently, Emby only displays the TIT2 field, so up to now, the tracks below all have the complete title in TIT2, while TIT1 and TIT3 are blank.

Using Puddletag, MP3tag, or Picard, the tags can be populated as intended in the ID3 spec, which would look like this:

Since TIT1 and TIT3 rarely apply to non-classical music, the app should ignore these fields when blank, only showing their content when populated.

Correct implementation of these Title fields would enable the additional option of displaying a composer’s works by composition (TIT1).

As I noted above, most apps are misusing and mislabeling the TPE2 tag. The ID3 spec actually has no field intended for ‘album artist.’ Going all the way back to the early days of Winamp, someone decided to misappropriate TPE2 and use it for 'album artist.'  This caught on and has become widespread. We should start a campaign to get the ID3 and Vorbis standards groups to add an 'album artist' tag to their specs.

I think someone should restore TPE2 to proper usage, like this:

As always, users can override all these tags in the case of errors or unique situations.

Can you zip up a sample song for testing? thanks !

Can you zip up a sample song for testing? thanks !

Umm, who is this intended for, and what do you want to test?

That was for you, so that i can test all of these vorbis tags. Thanks.

That was for you, so that i can test all of these vorbis tags. Thanks.

Sent you a PM.

Is there a plugin to see also Perfomer like it is shown on Brainz? I add there also performer (like drummer, guitar, ...) and if Emby can handle this, it would be a great feature.

Not at this time but I think adding options to music libraries would make sense.

Thank you for your respond. For me, I would love it. Because some time I just want music for example by a special drummer (which is often not mentioned as a name, especially jazz and fusion), like Lenny White oder Dennis Chambers.

Hi everyone, I'm new to all this, so my question might be stupid.

But what would I need to do to set it up so it works like Vicpa's set up? It looks so good. Where did you get the metadata to get the band members etc.?

This looks like it wold solve all my music problems.

Sadly those days are long past. music never seems to get any priority in the emby.  There is progress but then a couple steps back(Personal opinion only)

The band members/performers are readily available from musicbrainz. Just add the plugin.

the potential for music management tools could be so amazing but alas iTunes, Google music, Spotify, Plex and Emby are all missing a trick, but it seems most people don't care. I downloaded a trial of some software called "Roon" which seems cool, but won't run on my NAS drive and it's very expensive.

I have the musicbrainz plugin, but how do I get it to display all the information under "people" like you did? Is that something to do with tags?

I'm a totally newbie and I'm really trying to get my head around it before coping over 1000s of pieces of music.

We are constantly working on improving music support. People for artists is not something we currently do though. Thanks.

Also tagged with one or more of these keywords: Classical music, Metadata