Question about my user transcoding permissions


11 replies to this topic

Samsung model number: UE55 RU7305 KXXC
Samsung firmware version: T-MSLDEUC 1352.0
Samsung Emby client version: 1.0.76
My TV seems to not want to play anything at all.
What happens is I will select a movie or TV-Show, the buffering animation will show up, it will buffer for varying amounts of time (1 minute to several minutes), and then show a "No compatible streams are currently avaliable." error screen. In the log file of EmbyServer I can see "SessionManager: Session *** has gone idle while playing".
I've tried several different file formats. It won't play MP4 H264 with normal AAC audio, it won't play MKVs with both H264 and H265. The odd thing is that yesterday it played a whole season of a TV show fine, but that was after pulling power from the TV and reinstalling the Emby app. Today it won't play again.
Maybe it's something network related? I can't play music on the TV app either, but I can load photo albums and view the library. I have theme songs on many shows, and when streaming was working yesterday it would play those songs, but when it won't play videos or music it won't play the background theme songs.
Other streaming apps work normally on the TV.
You can see the sessions from the TV at the end of the logfile.

Hi, I can see in the log that there appears to be a bitrate limit set (7Mbps).  This will cause transcoding

This combination will generally result in no playable streams.

Please check the server, user and TV client settings to ensure that there are no unintended bitrate limits set

Thank you! I didn't even realize that the bitrate limit was there, it's probably hidden inside the app somewhere.

I disabled transcoding because the app would always start a transcode even though it would play fine after disabling transcoding.

Edit: It seems like the bitrate limits inside the app is hidden when transcoding is disabled for the user. Very problematic when a invisible setting is preventing playback! 😬

If you do this, please make sure to read the very important help text underneath the option.

Thank you for the tips.

Still facing the same issue after re-enabling transcoding and changing the quality to 4K 120mbps. Playback started at around 19:57.

Here is the media info: 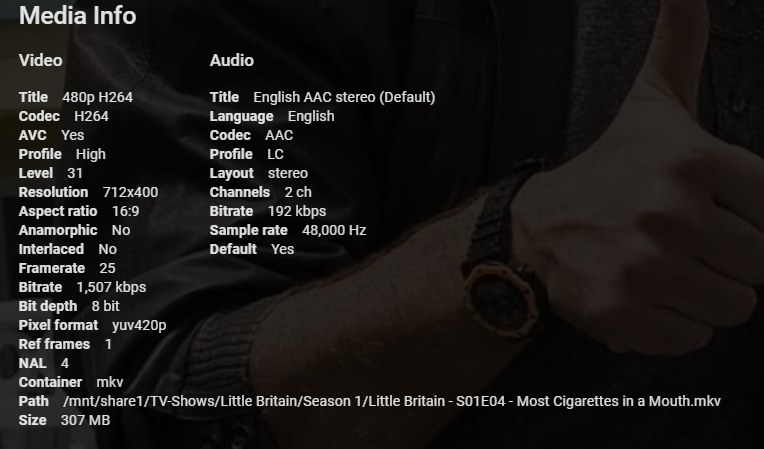 The app will buffer for a while and never start playback.

Tried another time now, and the app tried playback for 10 minutes then showed the same error as before: "No compatible streams are currently avaliable". The error screen is also stacked three times so you have to press return 3 times to get back to the main menu

I'm seeing these crashes about cinemamode.  Do you have it enabled?

I'm seeing these crashes about cinemamode.  Do you have it enabled?

I think it's just complaining about the Cinema Mode plugin not being installed. I tried to install it now but that did not make a difference. I figure the rest of the plugins are pretty non-invasive in regards to this problem, but I might be completely wrong?

Ok, I should have tried this earlier, but after manually adding my server using the local IP address to Emby Theater on the TV it now plays everything correctly.

I was previously using Emby Connect to configure Emby Theater.

I did see this error in the logs appear when using the TV with the Emby Connect method of connecting to the server:

I have both my phone and PC connected on the same network using Emby Connect so don't understand the reason for the problem on the TV.

The cinema mode error is nothing to worry about.

Back to Samsung Smart TV

Also tagged with one or more of these keywords: Tizen