Has anyone had any luck getting Emby to detect tuners (HDHomeRun in my case) on Windows Server 2016?  Emby installs cleanly on 2016 and with the exception of Live TV tuner detection/access I haven't seen any Server 2016 specific issues.  When I try to detect the tuners it comes back after less than a minute that it can't find the tuners.  Manually adding them by type and IP doesn't work either.

In searching the threads I see that I'm not the first to encounter this but didn't see a resolution.  Trying to diagnose this is a bit challenging as I'm not getting much to go on.  It isn't A/V or Firewall related.  Tried with both turned off.  The PC can see the tuners.  I installed the HDHomeRun setup program (20180817) and it sees the tuners and channels no problem.  I can launch a channel (have VLC installed) from the HDHomeRun Setup app and it opens and plays fine.

One more confirmation Emby never talks to (locks) the tuner.  I set up 1 tuner by IP and opened 2 Emby life TV sessions.  Both sessions clocked like they were trying to connect.  While the sessions clocked I opened the HDHomeRun Setup program and attempted to stream a channel.  It worked.  The tuner wasn't committed to Emby.

This 2016 server is my Media/NAS system and should be more than powerful enough to handle what I'll use Emby for.  That is if I can get past this tuner challenge.  From what I see with this I think Emby is likely the victim here.  Just how to prove it and identify what needs to be done to work around it.  Would be happy to test a diag runtime or run other tests to capture trace data.  Just let me know.

Any help is appreciated.

I'm running server 2016 and I have 2 HDHR Primes. I had no problems setting them up.

D, thanks for the quick reply.  Good to know someone is using 2016 with Emby.  Now, just to understand what is hokey on my server.

I haven't looked at the log. I imagine Luke may have grabbed it. I had no issues getting mine introduced.

Have you tried My HDHomerun, from the server machine?

I'm on older hardware so stuck at 1607 (standard) myself.  Hadn't thought about my.hdhomerun.  The first time the page was loaded (Firefox) it took roughly 12 seconds to report the tuners.  Subsequent tests were 4 to 5 seconds.  While it was good to see it work I'm struck at the lag.  The server has been performing well.  I don't use GUI on it often but when I do I don't see this going to other sites.  Browsing to my.hdhomerun on my other systems is nearly instantaneous.

One thought, when browsing for tuners in Emby it times out in less than 10 seconds.  With Firefox showing the initial report over 10 I'm wondering if it isn't timing out too quickly.  Do you by chance know if that value is exposed anywhere?

Update your firmware. You're running on an old version.

Apologies for the delay.  Have been doing a bit of learning and rebuilding.  Should be done in the next few days and will update this post then.  In the meantime, thanks for the assistance.

Regarding the updating the HDHomerun firmware post.  Unfortunately that doesn't appear to be an option.  I've tried installing the latest HD Setup software on a couple different OS' to verify it wasn't a particular environment or OS that was preventing flashing the 2 HDHR3-US tuners I have.  No joy.  I've seen chatter on the SiliconDust forums that at one point they could be flashed.  Realistically, there isn't anything in the new firmware that applies to the old tuners so not really losing anything.

Ah, you have an old model. That may be related to your issue.

Will try to keep this brief.  I fall into the tl;dr crowd myself.

At the time of the original post my media server was built using Windows Server 2016 (1607) with Desktop Experience.  When I did the original build out on the server I had wanted to use 1709 but it didn't like my old hardware.  The reason I didn't want to use 1607 was there were a lot of reported issues relating to user profiles and authorities.  When I installed Emby on my server and was having trouble getting legacy HDHomeRun (HDHR3-US) tuners to work those 1607 issues kept ringing in the back of my head.  When I did some traces of Emby trying to talk to the tuners I became more concerned with them.

After setting up the server, restoring my accounts, shares, files and whatnot it was time to install Emby.  Once that was all done Emby could see the tuners and add them no problem but streams never played.  HDHomeRun Setup would report that a tuner was being used.  Turning off the firewall let the stream play.  Not a good idea to leave it that way.

Doing a couple sniffs and enabling ports and traffic (UPNP) I could get it to work but it reduced the security of the server.  So, while spending money didn't appeal to me I dropped a buck twenty ($119) at Amazon for a new HDHR5-US 4 tuner.  It came in this afternoon.  Installation took seconds as did adding it to Emby.

It works nicely and just in time for AGT Live Finals.

Will do some sniffs later and add to this post if I see anything but as of right now my recommendation is that if it works and is secure then don't fix it.  And if you are trying to run Emby on Windows Server 2016 1607 and/or using a legacy tuner I would recommend updating/upgrading accordingly.  It is cleaner, likely more secure, and just plain easier.

Interesting, thanks for the info !

This looks to be the reason that I don't have 1803 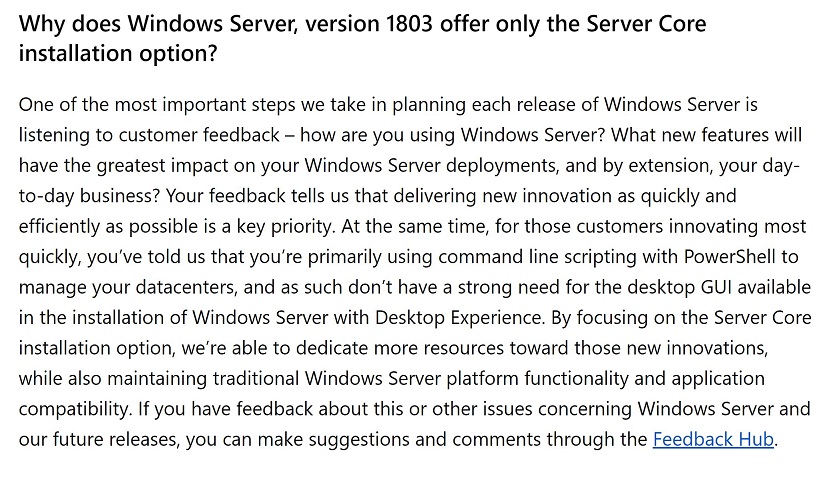 I might switch back to windows 10, because of this.

Or install the standard version of 2016 or is that core only as well?

Hmm...I'm getting board, again. Now maybe the time to take a run at Ubuntu, for the server.

Back to Live TV

Also tagged with one or more of these keywords: HDHomeRun, Server 2016