Doh. I forgot to look at the Console errors.  Even though I had disabled all my extensions earlier, it appears that there was still one causing a problem: EXIF Viewer.  Disabled and all is well!

5 replies to this topic

I've been using Emby now for about 5 months.  A month or so ago, my server got reset and I'd been too busy to get it up and running again until today.  After a bit of putzing, including a uninstall and reinstall of the lastest stable server, everything seems to be working except for accessing the server dashboard via Chrome.  When I access the server via localhost or my IP address on port 8096, I'm getting a blank page that appears to be the black Emby page background.  No images.  No menu.  No error message.

I've also tried MS Edge, which loads the page as it should every time, so it seems to be something unique to Chrome.  I've tried clearing cache, cookies, etc to no avail.  I've also tried disabling all Chrome extensions and updating Crome.  Still no luck.

Any idea what could be going on?  I did not have the issue with Chrome a couple of months ago.

Hi, welcome. The log looks fine. You could try clearing browsing data and see if that makes a difference. Thanks.

Tried that.  Clearing the browsing data doesn't fix the issue.

I did a "View Page Source" and Chrome *thinks* it has loaded the page.  But all that's displayed is a blank page: 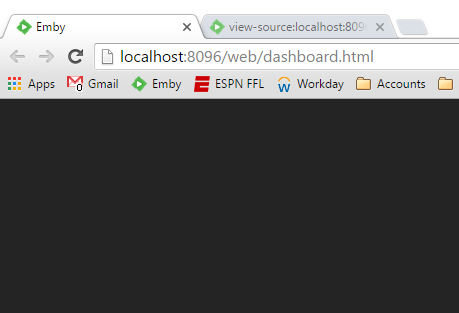 Ok, you can always check the browser console for errors via right click -> inspect. Also make sure Chrome is up to date and not a really old version. Aside from that, I'm really not sure. It looks like something environmental as I cannot reproduce the problem.

Doh. I forgot to look at the Console errors.  Even though I had disabled all my extensions earlier, it appears that there was still one causing a problem: EXIF Viewer.  Disabled and all is well!