Request: Add all the libraries "Next Episodes" as a single list 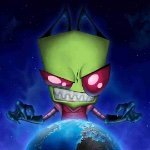