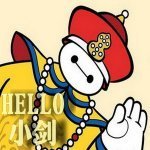 By lottelucky, February 11, 2019 in Feature Requests