90 replies to this topic

with cinema mode on in the web client most trailers fail to play due to "no compatible streams". emby skips on to play the custom intro and the movie.

Hi there, can we look at an example? please attach the information requested in how to report a media playback issue. thanks !

@Luke, I'm also having an issue with cinema mode where my custom intro plays, but no trailers are playing (I have it set up to play 2 internet trailers before my custom intro). I'm not getting any errors though, and nothing stuck out to my (untrained) eye in the server log. I've attached the log anyway though.

Cinema Mode is enabled and set to play 2 new and upcoming trailers, as well as a custom intro: 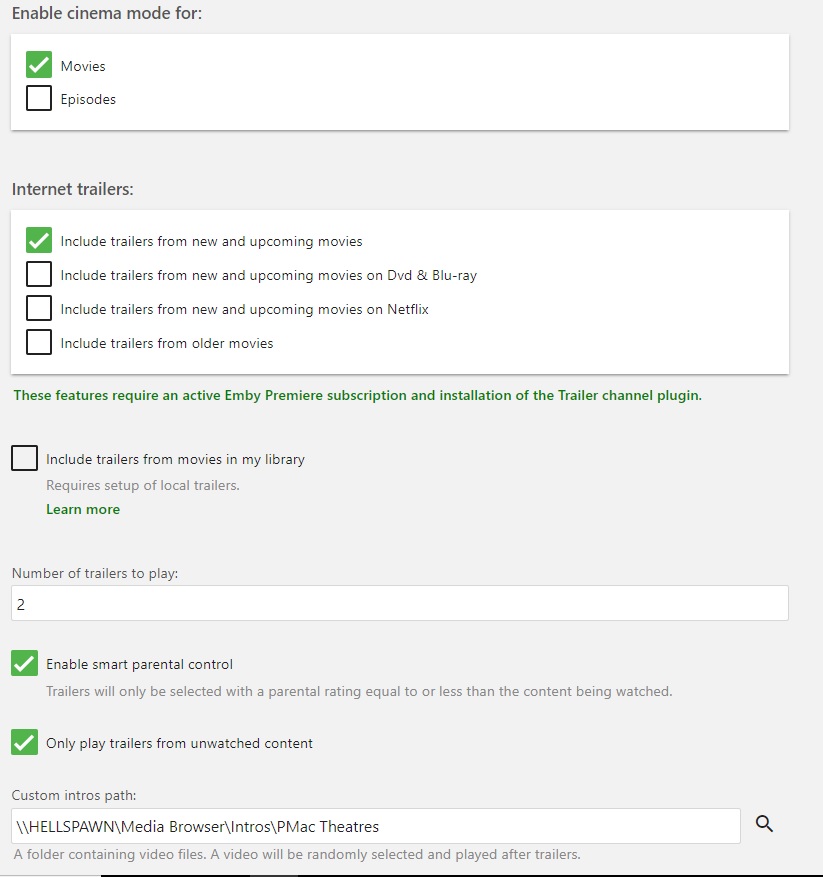 Also, I currently have v1.1.2.0 of the Trailers plugin installed.

Try unchecking some of those Cinema mode filters

Trailers play fine from the channel in ET and the web app, just not in Cinema mode (regardless of which app I'm using).

Remember that it also has to be enabled in the app that you're using it from.

I am also having the same issues as pmac except I'm using archlinux. I'm usually pretty good at diagnosing this stuff myself however I am left scratching my head. I have 3 logs and a screenshot attached to this. I see where my intro stops playing but then it just goes right into playing the movie.

On an unrelated note that screenshot shows like a bunch of random ffmpeg processes that run even though no media is being watched. Not sure if thats normal lol

Hi, please update to Emby Server 3.5, run a library scan, and then let's re-evaluate. thanks !

yaourt sees the beta 3.6.x but I'd rather not run a beta version for stability reasons.

It should be, yes. @alucryd can confirm. Thanks.

Do you need trailer plugin for the cinema mode plugin to work?
Or will the Cinema plugin just stream trailers from youtube before the movie starts?
So far I haven't been able to get it to work either just yet.

Tried without the 2 filters, now I have the parental filter back on.

Either way, same problem, movie just starts without trailers.
No custom intro so that isn't the problem either.

Yes you need the trailer plugin. Thanks.

Did you guys ever come up with a solution for this one?   I have the same issue on version 4.0.1.0

I too am having the same issue -- trailers do not play before my "main feature".  Cinema mode worked fine before I upgraded to v 4.x.  Now it does not work.  I have tried un-installing and re-installing both the the "Trailers" plugin and the "Cinema Mode" plugin to no avail.  My custom intros seem to be working (although the selection always seems to be the same custom trailer rather than selecting one at random).  I haven't really looked through the logs too much as they are quite large.  If anyone can tell me what to look for, I can grep for that.

There are several topics on this and it is being looked into.

I totally forgot I posted here a while ago.

Was before the big server update though.

Fixed itself after a week, maybe 2 weeks (server update perhaps?).

Wasn't paying attention to it since the feature doesn't add too much of interest for me (disabled on my own account currently).

Also have no specifics so the information is probably not of much use.

PS: rebooting emby, or server didn't help with it, that much I do know.

Cinema mode is not working since I updated the server

Cinema mode is not working since I updated the server

Back to Web App