6 replies to this topic

1. Prompt to load more guide data at midnight of each day: Instead of doing 9 hours from right now, always load from now to midnight then ask to load the next 24 hours. Reason? If you're checking what's on this evening ("prime time") before noon, you're in for a world of annoyance hitting the "load next 9 hours" prompt which is around 7-9pm. After midnight, most networks go to repeats or dead air.

2. Lock the cursor to whatever time the user selected before moving down/up: Went to 7 pm to see what was on during "prime time" but as you click down the list, it could select a football game or movie that runs many hours that ends at, say, 7:30. This moved the cursor back to when the game/movie started which could be, say 4 pm. Keep scrolling down and you could literally travel back in time 7-9 hours to real time (was about 1 pm if memory serves) because the cursor doesn't look to the time you were looking at (7 pm).

3. Display the program info if the program info is off screen to the left: An extension of #2, when there is something long in the guide, it should display the info that is off screen (to the left) to the screen (to the right) so you can see that it is the tail end of, for example, a football game without having to look at the guide information for it.

1) We are limited in the amount of items we can show just due to technical limitations so 9 hours is about the max.  But answering one prompt is "a world of annoyance"...?

2) The scrolling behavior is actually the result of a request to make it work the way it does but we don't really have a whole lot of control here.  We had to jump through hoops to make it stay on the left edge of programs instead of jumping out to the right.

3) Sorry, I cannot visualize what you are asking for here.

1) Say that 9 hour period lands at 8 pm. To see the rest of prime time, you'll hit the prompt and have to wait for it to load the next group or you'll have to say no and dare not to see what is on at 9 pm. I think the prompt is 80% of the problem. Perhaps a streaming engine would be better here where it actively loads from the server what is visible. If you're moving too fast for it, you'll see guide info pop in but, as long as it isn't painfully slow, that would be a neat feature rather than an annoyance like the pop up.

2) I don't know how it is coded but what you'll probably have to do is create invisible stop points at every half-hour for everything that exceeds half an hour in length. That way there is a UI element for it to select that isn't off screen. This change would also aide in fixing #3 and make movement through the guide more intuitive (if you hit a movie or football game, the guide moves way too fast)...

3) This picture is from Emby Theatre but the problem is the same. Look at the purple bar and how it doesn't say what it is. The text should pin to the left edge of the screen so that, unless it is just a sliver wide, you can see what the program is ("The Rundown") without highlighting it.

You posted this in the Android TV section.  Did you mean to put it in Emby Theater?

On Android TV, you can see the names and what time the item started... 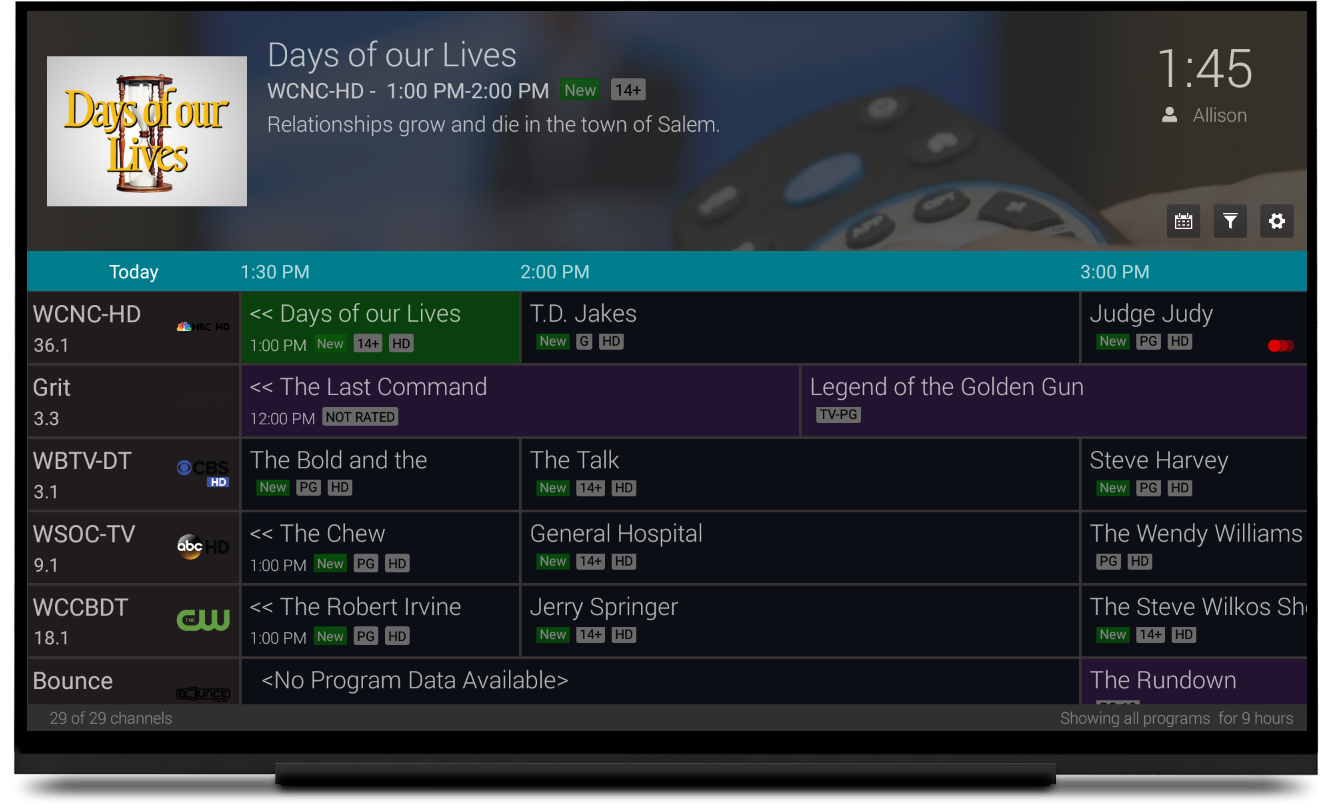 That looks quite different from the 1.2.69g beta I have loaded. :s

That is good though and that checks off #3.

Nothing has changed here since that version.

Perhaps you meant after you scroll to the right as opposed to the actual left end of the guide data?  If so, that would be a bit tricky but maybe could be looked at later.  As I mentioned, the scrolling etc. is all being handled by the Android framework here so we'd have to try and write a bunch of custom stuff to do what you are asking.

Ah, yes, that's it. All three issues presented themselves at the same time so it was about 10-11am and he was looking at stuff at 7-8pm. There's no way to see if it is a football game or a movie just by glancing at it. You'd have to hover on it or move the guide to the left to see it.


If you're going to do custom stuff, streaming the guide I think would be the best, nay, spectacular!

It would be awesome if all of the guide apps/programs streamed the guide.

Back to Android TV / Fire TV

Also tagged with one or more of these keywords: live tv, guide, suggestions