89 replies to this topic

I am using the latest Chrome version 72 on Linux and the latest Emby server version. The chromecast icon in emby does not present an option to connect to my chromecast. Only has "my device" option, which does nothing. I also have Chromium 71 (hasn't been updated to 72) and it still works with chromecast in emby.

Chromecast is found by other video sites and youtube in Chrome 72. But in version 72, Chromecast link popup is different than in previous chrome version. Anyone else have this issue?

Hi there, it seems to be working just fine in my testing. Can you try restarting the browser?

Thanks for your response. I have restarted my browser, and emby server, and Chromecast. Still the same. I've looked for a setting somewhere,but can't find anything. Like I said,it works fine on Chromium, which is at version 71. It must be something with Chrome 72.

Ok, thanks. In my Chrome browser, when I click on the cast icon in emby, I only have one option "My Device". In Chromium, I have 2 options, "My Device" and "Chromecast". And the chromecast option works with casting emby. I'll just use Chromium when I want to cast and see what the next Chrome update brings.

Thanks for the info.

Have the same issue in Chrome on Linux. I'm able to cast to chromecast from my android device without issue, but when trying to do so from the laptop, Chromecast isn't an available option. Just installed chrome last night so I'm sure it's the latest version, will have to check later when I'm near that machine. Good to hear it works properly in Chromium though, maybe I'll move over to that, or install it as well, so that I can avoid this issue. The ability to reliably control the casting from my laptop is the primary reason I switched from plex, where it suddenly stopped working, but the cast option remained.  Now I wonder whether that was actually an underlying chrome issue, but I'm switched, and paid so I'm not going back

Glad to hear I'm not the only one with this issue. If you do install Chromium, make sure you do it before it gets upgraded to version 72. Keep v. 71 untill we find out a solution for Chrome.

Another piece of advice. If you've got your bookmarks and extensions and other data in Chrome, and don't want to lose it in Chromium, I found that you can copy the Default folder in the .config/google-Chrome folder to the .config/chromium folder. So far I haven't had any problems.

Chromium Version 71.0.3578.98 (Official Build) Arch Linux (64-bit)
Chromium doesn't seem to see any chromecast destinations at all, my chromecast, and three google home minis are completely unseen by it. So in this case it's not Emby's fault. Frustrating though. Have tried google's kind of pathetic trouble shooting steps to no avail.

Just to be perfectly clear -- casting desktop, tabs/etc to chromecast works great from chrome, but isn't an option within emby. On Chromium 71, I can't do either, so that's not a usable workaround for me unless I can work out why the cast devices aren't appearing within chromium

Interesting, thanks for the info.

Hey folks - we ran into something related that may help: https://github.com/j...yfin/issues/791

Essentially, starting with Chrome 72, cast_sender.js has to be served from an HTTPS source, or else it won't work.

Thanks for the info. Yes so that means Chromecast on the local network will now be a little more difficult.

You need to be using the web app within a secure context, so that means https or localhost. You can also use the android or iOS mobile apps and they will not have this restriction.

Thanks to all you smart geeks (I mean that lovingly), casting is now working on Chrome v.72 using localhost:8096/web/index.html#!/home.html

Not sure how to do the https thing.

Nice! Great find on the cause.

So, how does one go about setting up https for the emby server on a local network? I only see SSL config within remote connection settings.


Seems like what we need, ideally is a letsencrypt cert, associated with the local machine name.

For now you'd have to enable remote access, but we can improve that for the next release. thanks.

Thanks everybody. I've managed to create my own internal CA cetificate, and then create a p12 cert signed with it, enabled remote access so that I could populate that cert, but I'm not actually forwarding any remote traffic, anyway that was sufficient to be able to access emby via https on my local network, and now I'm able to use chromecast again from the laptop 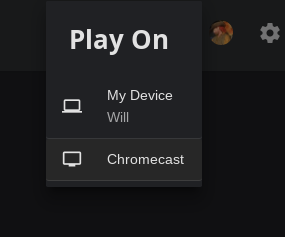 Back to Web App