10 replies to this topic

One of the two football game I recorded this weekend is not playing, the other is.

I restarted the server to clear logs then tried to play the problem file again.  It stalls on Roku, will play OK from the web client.

The web interface shows the recording that stalls out as playing to the TV, but on the tv itself it just stalls on loading.  I noticed that on the stalled recording the server says direct playing where when it is actually working it says direct streaming.  Both of these are in the same 720p MPEG2 format.

I do not get an ffmpeg log when I play the file that errors so only attaching the one from when I played the second file that does work.  Its like it doesn't try to enable transcoding on the file thats not working, even though they both should be,

I have tried this on both the release and beta emby servers and Roku apps, both behave the same but attaching logs from beta here.

I dont know why its trying to direct play the file thats not working, they should both try to direct stream I would think to the Roku (MPEG2).

The only difference between these two files that I can think of is the working file was recorded before I enabled thumbnail generation in the DVR folder, and the file that isn't working was recorded after I enabled this.  But both had thumbnails actually generated for them (via scheduled tasks), and both work fine in the web client, only the one is having issues over Roku for some reason.

Anything else I can run to help diagnose let me know.

EDIT: I converted the file to test (and to see if I can actually watch it

) and that allows it to work, playing the mkv it converted the recording to just fine.... 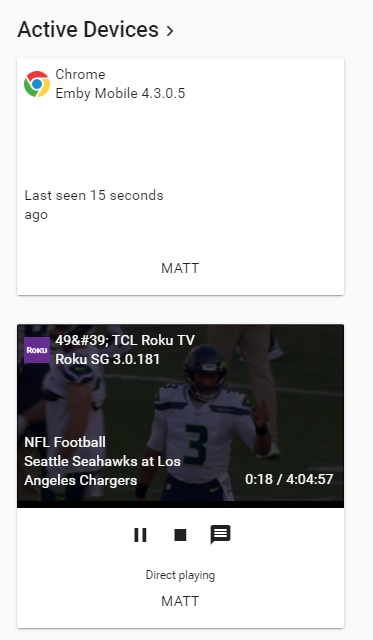 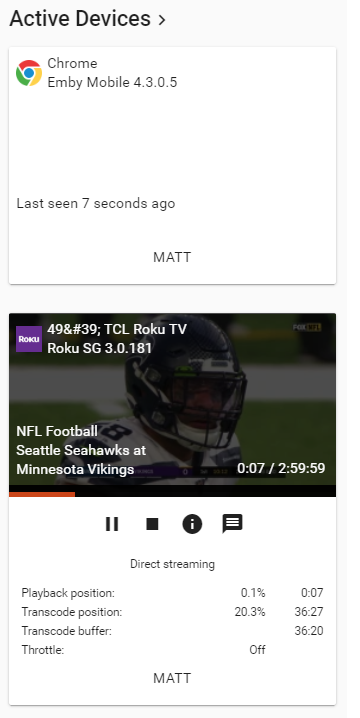 Just to update, I cant get this to repeat so maybe it was a fluke.

A new football game recorded the next day, I changed nothing in settings, thumbnail generation, etc and it plays just fine.

I will post back to this thread if it does repeat.

Ok let us know if it happens again. thanks.

Are you still running into this?

Nope!  I have not had a recording fail to play without having to convert it again.

This just happened again, I am converting the file so that I can play it but will keep the original.  This is on 4.2.1.0 server and same results on both Roku stable and Beta when trying to playback.

Let me know what I can provide to assist in troubleshooting.

Today:
Allowed the show to record, I did not even watch while it was recording.

Tried to play, Roku progress bar starts loading but stops (and returns to 0%) after maybe 20% of so.

Server admin console still shows show is playing to tv (direct stream) and the progress timer counts forward like normal, but nothing happens on TV.

Show continues to show in Emby server admin as playing to TV for about a minute, then stops showing its playing, show never actually plays.

Fails on both Roku Release and Beta

Have you had a chance to review?

This happened again today, I have a bit more feedback that may help as well.

I selected the show (an NFL game) while it was still recording (by selecting the recording show, not tuning into the channel), and it played just fine, I tried again after it had completed recording and again same thing, it will not play.

I again was able to convert it and it plays fine after that, but this can't be right...

Attaching logs from directly after I did the above, which played while still in progress and then failed after the recording completed.

I am seeing this as well.

Have you had a chance to review?

Please try the next beta server and let's see if that helps. Thanks.