98 replies to this topic

That's funny, I also failed trying armbian (one of my first attempts)

Forget about VDPAU - our ffmpeg doesn't support it anyway..

Have the explanations given here helped?

We for see if I find a a way getting h264 encoding working on rockpro64, I known in kernel 5.x is work in progress getting vaapi working for rockchip video encoding and decoding.

or should I buy a another micro computer like raspberry pi4.

@softworkz Suggestion which should work best with emby asus thinker, raspberry pi4 or anyone else ??

Thanks for the feedback!

@JaScoMa may have some insight about your hardware question.

We for see if I find a a way getting h264 encoding working on rockpro64, I known in kernel 5.x is work in progress getting vaapi working for rockchip video encoding and decoding.

You misunderstood. No need to wait for any development. You just need to install a different OS. I had the same problem and couldn't get it to work with armbian. Then I installed one of the regular OS versions and it worked right away!

@softworkz Suggestion which should work best with emby asus thinker, raspberry pi4 or anyone else ??

When you want to have a small all-in-one device: Nvidia Shield. It has the best hardware acceleration support and decent CPU power. I bought a RockPro64, which appears to be pretty cheap at first sight. But when you've added all components (you know what I mean when you have one) plus shipping plus import tax (at least in my country) - it easily exceeds the price for a Shield. And compared to a Shield, a RockPro64 is inferior in pretty much all aspects.

RockPro64 was cheap around 100usd with tax.

I will try another os

RockPro64 was cheap around 100usd with tax.

I will try another os

IMO, the following is the absolute minimum that you need: 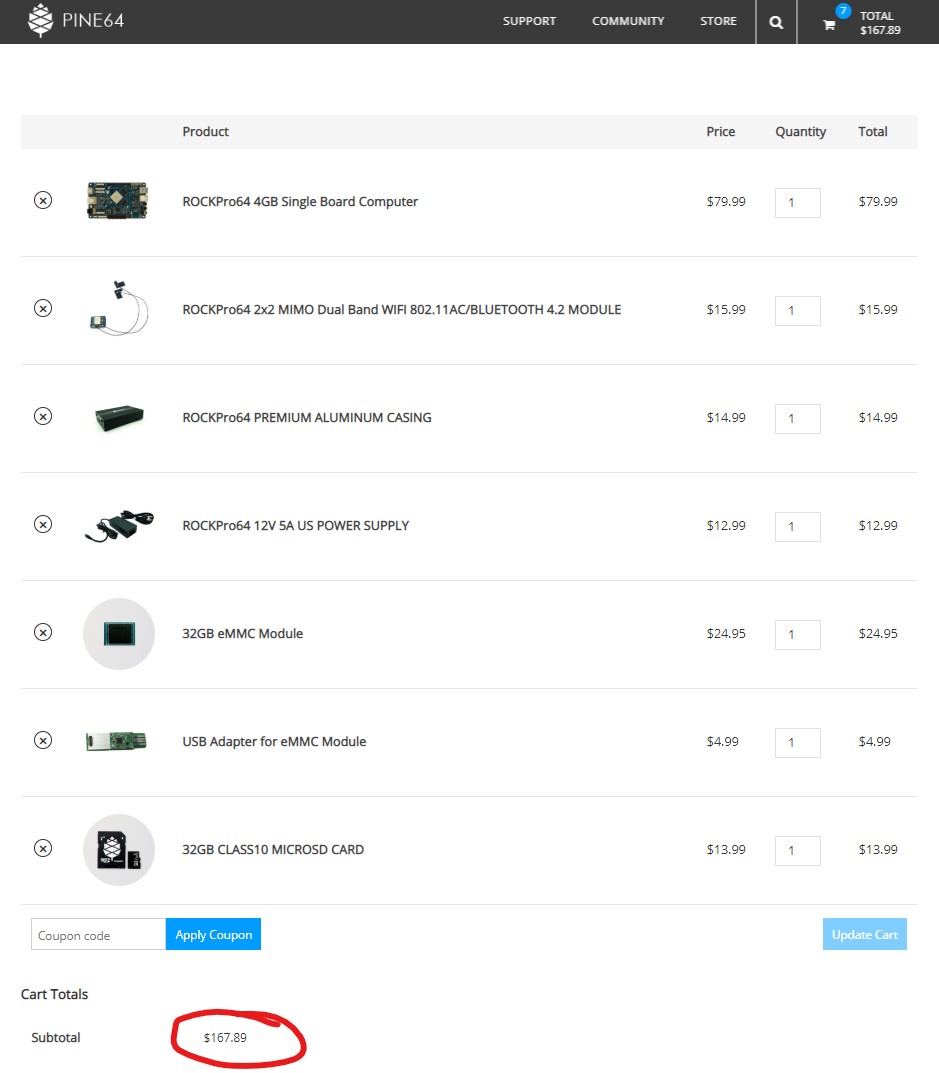 These $ 167 are without tax and without shipping.

Simple I only need the board did cost 59 usd in a campain batch 2, rest part I did buy cheap in my country.

Let us know how it goes. Thanks.

It looks like VPU support is better with the mainline kernel since it includes panfrost driver (open source driver for midgard).

I was planning on waiting till the transition to mainline kernel is complete then take another stab at getting ffmpeg to use hw acceleration. If I am able to successfully encode/decode with rk3399 VPU on mainline I will report back, but until then I think it is out of scope for emby since emby uses ffmpeg for transcoding.

P.S. Thanks for the support guys!

Hi Luke
I did forget add the log, but when i discover that I did attach few sec after I did the post.

Brocklobsta
I did run armbian latest kernel, I did the switch today to Ayufans Ubuntu, The panfrost driver are very buggi not recomdate to be use at all at moment it only work for few opengl 2.x apps at moment.
VPU are not supported by emby

the ffmpeg version that comes from pine64 contain hardware decoding

say VPU is supported in rockchip linux kernel 4.4 and Gstreamer

I wish it did exists a way I can choice wich ffmpeg I want to use and wich codecc for h264,h265, mpeg2/4 encode and decode in advance settings

@GreatLord - I just invested 2h to wipe my Android test from the RockPro64 (that's the point where I stopped) and installed the latest Ubuntu LXFE ayufan distribution (simply the first entry in the list of the Pine64 installer).

Installing Emby went well and I quickly got everything going - except for the hw side of course.

I installed the libmali package you quoted above and rebooted.

Then I tried the same command line from Emby using the "fmpeg version that comes from pine64".

=> I got the same error like with Emby's ffmpeg:

So, unless it doesn't even run with "their" ffmpeg, there is no point for us to go any further.

Please note that we are limited to h264_v4l2m2m encoding. And that won't change soon (see below).

So, there's no point in exploring and proofing that rkmpp decoders are working or something similar.

h264_v4l2m2m encoding is the only thing that Emby can do.

We both got it working at some time earlier - same like you I don't remember the details.

Most of the time I spent today was for looking at the work from Pine64 regarding ffmpeg and media support in general.

I looked over a lot of GitHub repos, from both - Pine64 and also the rock-chips.com company - and there's a common picture:

Most development has ceased in 2018. There are punctual areas where people are still doing some work.

I'm afraid, that's just an incredible mess - and I don't see any way to go much further here right now.

Please understand, that when we start investing time and money to extend hw acceleration support on this platform, it needs to be something that is generally functional over a certain range of OS variants and without having a wide range of pre-conditions and required user actions to make it work.

Getting it work with a very specific OS and a specific kernel and some patched drivers and other patched and modified components plus then a custom modified and also patched ffmpeg version that is again specific to that certain scenario - that's not a justified goal to put any work on.

Long story short: When you get the h264_v4l2m2m encoder working with "their" ffmpeg and it wouldn't work with Emby, then we can surely see if we can fix that.

Otherwise, it doesn't look good. I think the chances to get something working with hwa are a bit better using Android instead of Linux.

I took some more time and tried the Android Pie stock ROM that Pine64 is providing for download.

Same as with Linux: Emby works fine, but hw acceleration does not. Emby detects a single hw codec "k.video_encoder.avc" but it doesn't work.

(just fyi: Emby can detect codecs on Android, but not on the RockPro64)

Hi softworkz
I agreed rockchip is big mess how to get hardware encoding and decoding work, only way i can see it to getting proper work if some write true working driver for main kernel.

I start getting sick on rockchip.  I am thinking to switch to raspberry pi 4 or try find something else small devices with usb 3.0 that can work as my usb nas controller computer.

U mentor Nvidia Shield is not right choices for me. My NAS is usb 3.0 box with 5 hard disk, so i need a microcomputer for it,

Hi softworkz
I agreed rockchip is big mess how to get hardware encoding and decoding work, only way i can see it to getting proper work if some write true working driver for main kernel.

I start getting sick on rockchip.  I am thinking to switch to raspberry pi 4 or try find something else small devices with usb 3.0 that can work as my usb nas controller computer.

U mentor Nvidia Shield is not right choices for me. My NAS is usb 3.0 box with 5 hard disk, so i need a microcomputer for it,

If you get a Pi4, let me know what OS you end up installing on it and if HW enocding works "out of the box".

I'd also advise against trying a Raspberry, if you want a serious solution that can do transcoding.

For hw accelerated transcoding, it's not just about having decoders and encoders. We also need to do processing like:

With 4k and 10bit videos, this is a task that none of those 'little' devices are capable to do.

For building something compact, I would look for something with an Intel CPU instead, like many "real" NAS devices are doing.

Those CPUs are still not powerful enough to do the tasks above, but they can do this processing in hardware (GPU based).

Also, for certain operations, they can map memory instead of copying (because CPU and GPU memory is physically the same).

Today, Intel CPUs are simply the best choice for video hardware acceleration at a small scale.

Also, Intel and Nvidia acceleration is where you can expect the most innovation from our side in the near future.

Thanks for you advices and recommendations I am aware that intel got good hw encoding and decoding support in linux,
I was hope to not buy like intel nuc, but It seam I don't really have a choices to get good experience. My NAS is my own home maid one, so I can but it in any microcomputer or computer with usb 3.0 support for it.