12 replies to this topic

I've been stuck trying to add my library to Emby since installing two days ago. I used to use the app a few years ago without issue on a Fedora install and now it only ever loads locally-stored media.

I have an NFS share on 192.168.1.254:/srv/media. Initially I tried mounting it and then pointing Emby to the local mountpoint.

When I add 192.168.1.254:/srv/media to my fstab, the directory mounts on boot correctly and members of the :media group (of which the emby user is one) can write to the folder. Then I start emby and the share may as well have never been mounted because Emby sees nothing and processes nothing at all in that folder.

So then I remove the share from my fstab and proceed to let Emby handle whatever mounting needs to be done by supplying the Network Path in the Library setup, at which point it complains about every path format I give it.

These are the paths that do not work:

And all of them throw the "There was an error adding the media path." error

Apparently Emby can't access my media on its own unless its on a local block device, so now I'm totally confused.

Do i need another piece of software installed on 192.168.1.254 just to get the share to work with Emby? Running multiple "helper apps" across multiple machines on top of NFS is complete overkill.

Any insight would be helpful, I feel like I'm wasting my time and would just like a straight answer as to whether Emby supports NFS without extra utilities or setup.

Sounds like you do not have your nfs mounts set up properly.

Thanks for your assistance.

The relevant line is:

I've managed to add a single subdirectory from this share and all media files in the folder show up. (/srv/media/conferences)

This was possible via the "Add Media" dialogue box. I navigated to /srv/media and the conferences folder showed up automatically as a subdir. Screenshot: 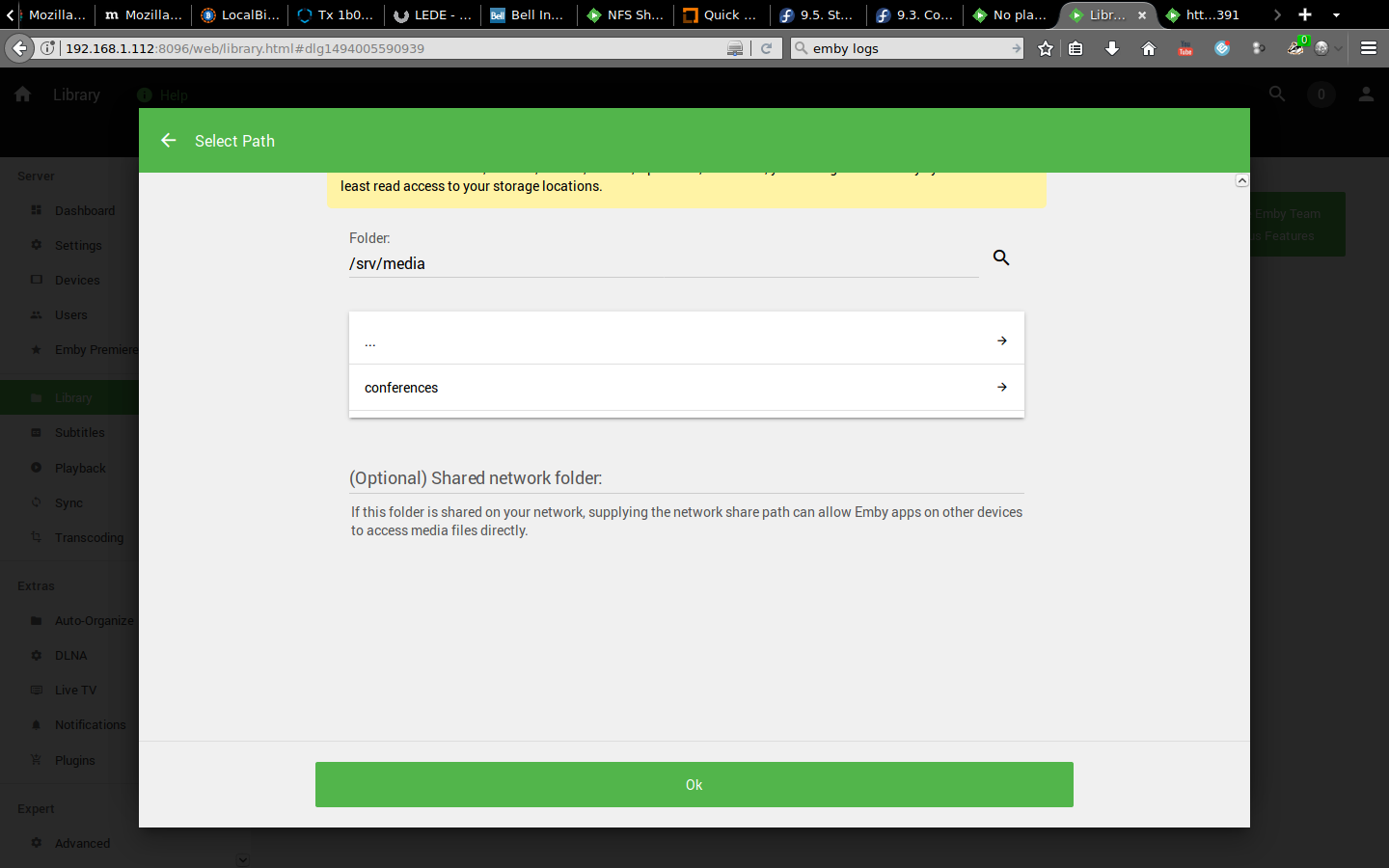 However none of the folders I want to actually import (/srv/media/movies /srv/media/tv_shows)appear (as seen above) in the "Add Media" dialogue box; I have to manually enter the path and the subdir does not show up automatically as it does for /srv/media/conferences, and movies in /srv/media/movies are not appearing at all once added this way.

It would appear there is some unspecified reason why Emby doesn't like certain subfolders even though theyre 777 the whole way down. Sure would be nice if it told me why.

Hi, what you would need to do is mount it to a local share and then add the local share to Emby. Let us know if this helps. Thanks.

Mount the drive and folders, point emby there, and add the optional network path in nfs format nfs://blah.blah and it'll work.  I use purely NFS on my network and I've never had any issues.

Hi, what you would need to do is mount it to a local share and then add the local share to Emby. Let us know if this helps. Thanks.

As far as I understand it, that's what I've done. I've mounted 192.168.1.254's share to my local /srv/media folder, and then attempted to add a subfolder of that share, however only a single subfolder shows up in the Add Media dialogue box as pictured above

Mount the drive and folders, point emby there, and add the optional network path in nfs format nfs://blah.blah and it'll work.  I use purely NFS on my network and I've never had any issues.

Thanks mastrmind11, I gave that a shot but the result is the same as when I just provide the local mountpoint for the nfs share without the nfs://blah.blah.blah/blah optional network path 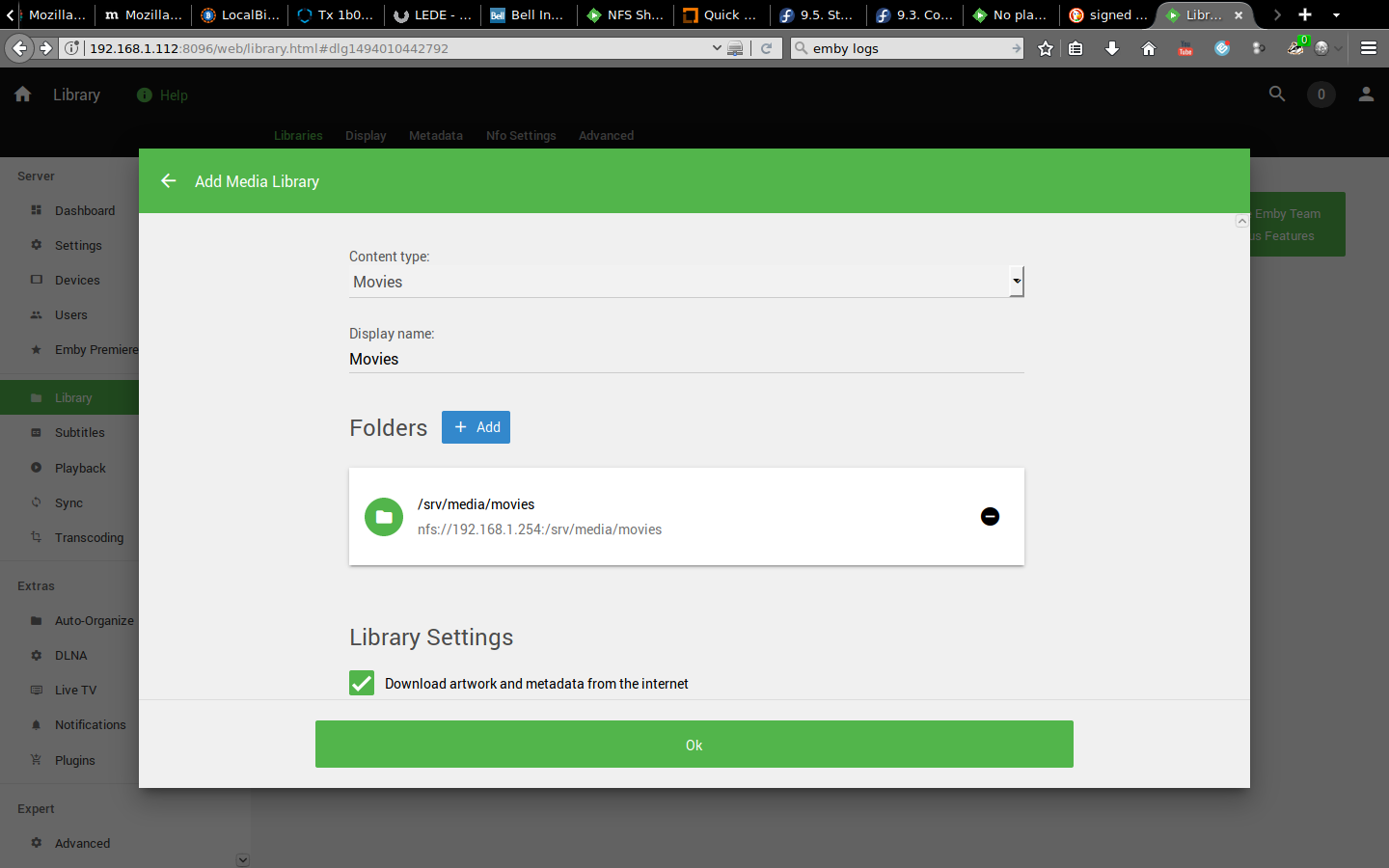 The Library appears to be added correctly, but the media scan ends almost instantly and the folder is empty in the Dashboard 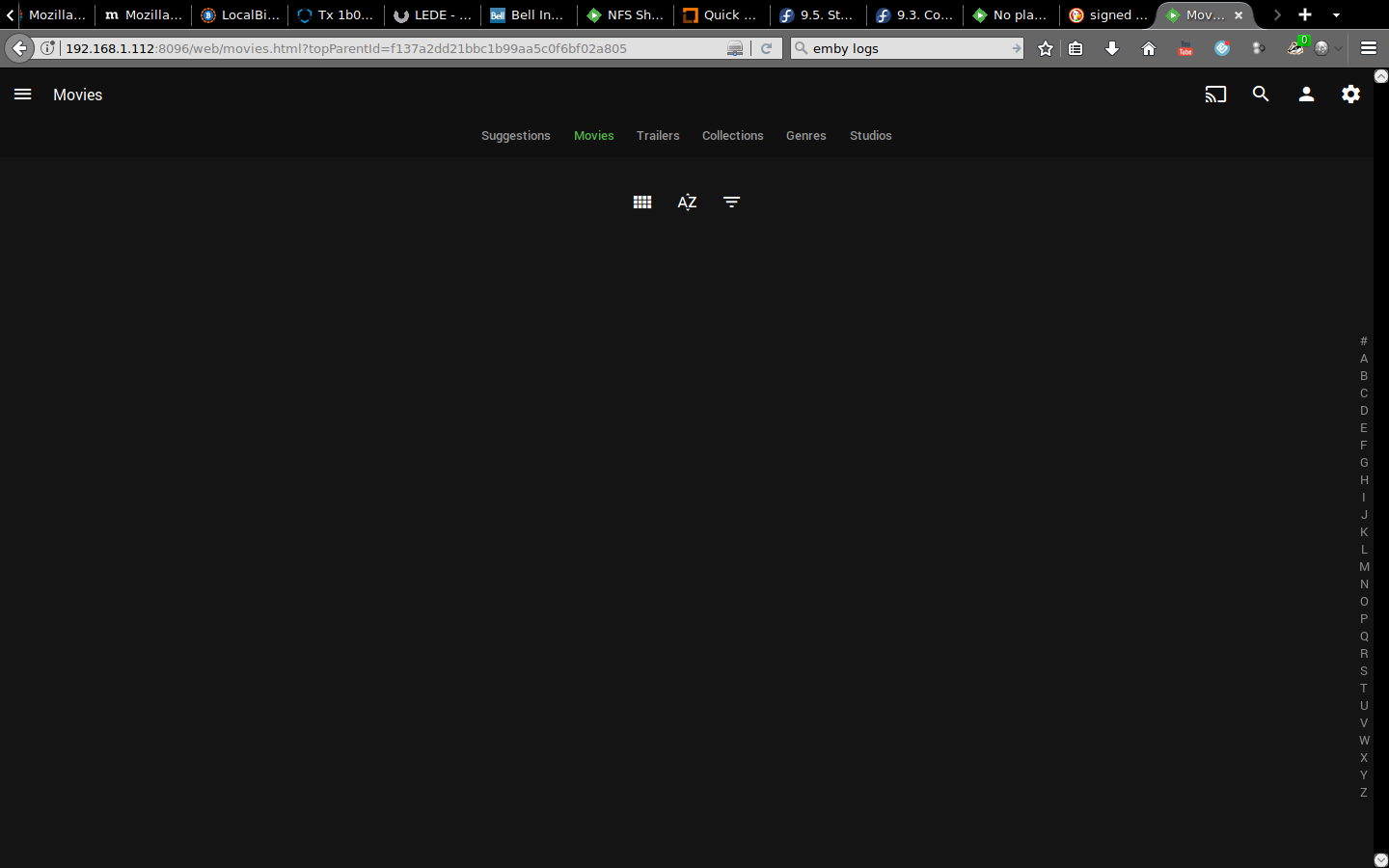 I know the NFS share is perfectly fine because I access it from an OS X machine as well as via other linux machines without issue.

I really don't know what could be the problem, because obviously it has no trouble playing media on the same share in the /srv/media/conferences folder so my syntax is twice confirmed to not be the issue.

You can even see in logs that Emby fails to scan the directories adjacent to the conferences subdirectory.

Here's the successful scan of /srv/media/conferences

I've reinstalled nfs-utils to address anything serverside, and since the video files that are recognized by the library scan are mp4s I've moved a handful of my mp4-format movies - which the server refuses to even acknowledge let alone parse - into the only folder that is functioning as expected, /srv/media/conferences.

Despite this, emby completely ignores these new mp4s while all the previously recognized mp4s (that remain in /srv/media/conferences) are recognized just fine again.

These files play happily in VLC so the issue here seems to be that Emby simply doesn't like my media anymore, despite the fact that I've played all these files before on my previous install.

If I am never to read these files again on Emby I guess emby needs to go. I shouldn't have to choose between my collection and using the software.

I've confirmed this is the case with about half of my library; files that the scan sees show up in the logs and in the library and are playable.

The other half are not playable despite being in the same NFS share folder with the same permissions.

Funnily enough, once I move them to a local directory and add that directory to the library, the media has no trouble playing. Seems Emby wants its media encoded and stored just-so, as the wrong combo renders a file invisible.

I can only conclude that NFS is not to blame here, but rather a combination of certain encodings + NFS + emby's use of FFMPEG during scanning.

This is all kinds more complicated than it ever was back when I first installed in 2015. I have no interest in storing these files locally as I want them on a nas, so its clear Emby won't do what I'd like anymore. Did not expect features to regress and I'm quite disappointed.

Can you show us what the folder structure looks like? Thanks !

Folder structure is (with permissions set at 744 recursive)

/movies (Files do not appear at all during scan, never enter logs or library)

/conferences (Emby does not see about 50% of files during scan, never enter logs or library)

/offline (Media sees unseen files here during scan, they appear in logs, can play from here in Emby)

It's probably worth mentioning that I just swapped NFS for Samba/CIFS and Emby is seeing all files and seems to be scanning as I'd expect.

There is definitely something amiss with the NFS + Emby interaction, at least on my stack.

Thanks for the info, that is helpful.

Also tagged with one or more of these keywords: issues, unclear, NFS, Linux, fedora