according to https://github.com/M...ing-conventions it should be okay, to have episodes named just with episode number and episode name.

When I rename the file to “S02E06 Paradigm Shift.m4v” everything works fine and i have an episode named “Paradigm Shift” with season number 2 and episode number 6.

Do have have to rename ALL of my tv media files to correctly work with Emby because the TV-Naming wiki page is incorrect. Or is there a problem with Emby?

hi @cloudstriker83, I tested this with no problem found. Notice how the info has episode #9. 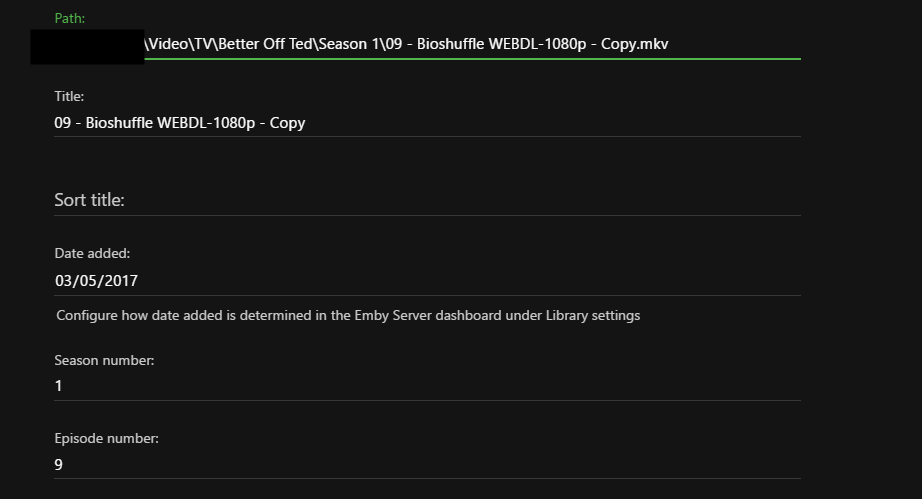 I think the actual problem is that the tvdb server is having some difficulty today and is timing out quite a bit. As a result some metadata fetches are failing and that is why you're not getting the proper title.

Sorry, i understand you're operating under the assumption that there's an Emby problem but that would a bit of an injustice as it's 100% related to the tvdb server issues.

To prove this, I turned on the MovieDb provider for episode metadata, then I added a new episode using your convention above, and viola, correct title, overview, image, everything. 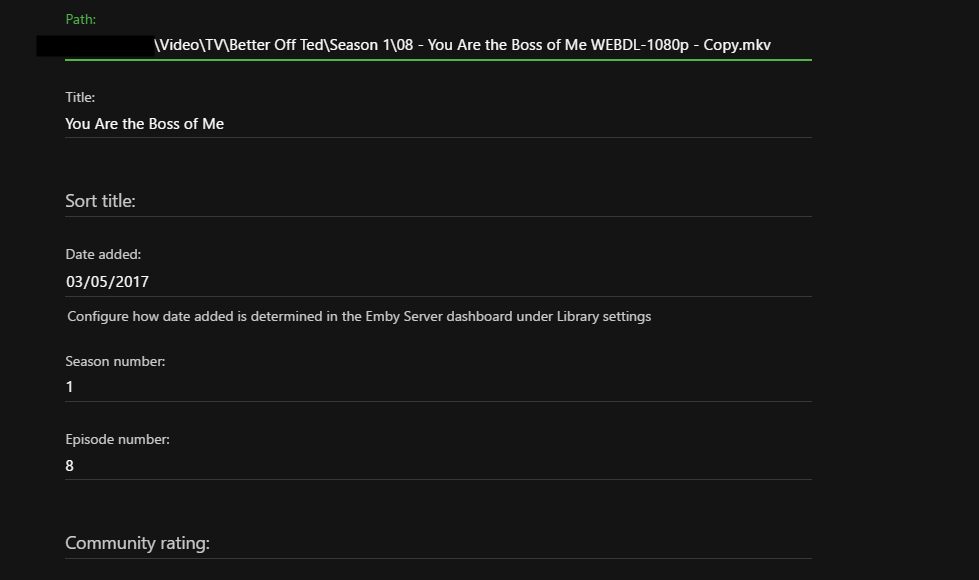 I just disabled tvdb for metadata for tv shows, seasons and episodes and switched to moviedb. I then created a new file for episode 7, which didn't exist as a file before (just to prevent something stuck in some kind of cache).... and: the same problem, even now with moviedb. Episode number is part of the title, episode number field is empty. 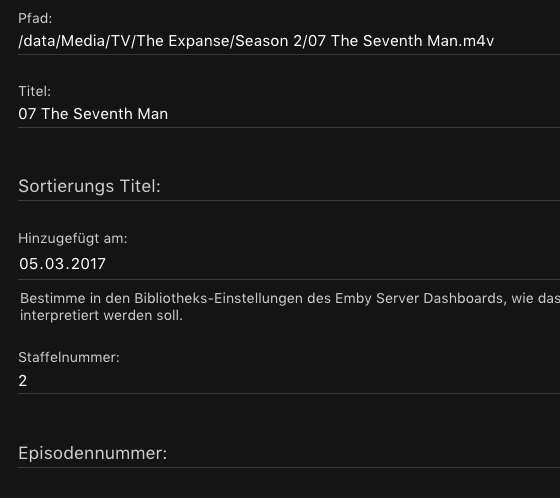 Then I created another new file for episode 8, but with S02E08 naming and it worked fine. 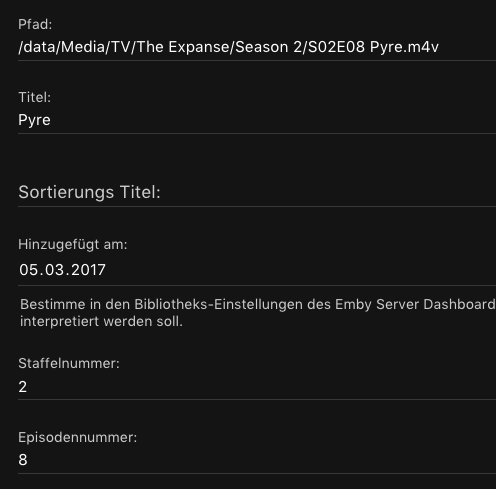 I just copied the “The Expanse” folder into a new “TestFolder” and renamed it to a tv show I don't own. So I have the following structure TestFolder/Two and a Half Men/Season 2/...

The video files still have the names (and inline meta data) of The Expanse, like before, and yet again the only files, Emby seems to correctly recognize are the ones with the S02E0x file names. They get the correct meta data and have the episode numbers in the file info overlay.

I tried this with tvdb as metadata source as well as moviedb as source.

So it seems unlikely to me, that this has something to do with tvdb (which by the way is up and running normally right now) as I can reproduce this beviour independent from the data source.

With that in mind I disabled all of the metadata sources for tv shows, seasons and episodes. I created a new library and started scanning. And again the same result. There are obviously no images, summaries etc. in the episodes, but while “01 Safe.m4v” is now titled “01 Safe” with a blank episode number:

And then I noticed something on your screenshot that differed from mind: you used a dash between episode number and episode name. So I renamed the file “01 Safe.m4v” to “01 - Safe.m4v” and this is what I got:

Emby recognized the file as episode 1 of that season. But this is NOT what is mentioned in the naming conventions of the Emby wiki. There is “02 Episode Name.avi” one of the possible filenames (and not “02 - Episode Name.avi”).

what does your emby library setup look like? where does this folder appear in setup and using what content type?

@Luke  as OP noted all formats except spacing is working.  Tested and episode 02 was not identified. 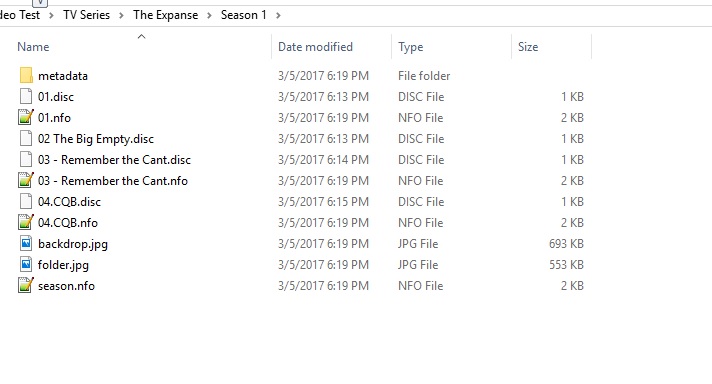 The MediaBrowser.Naming repo says it features the support of all http://kodi.wiki/vie..._files/TV_shows namings. There you'll find the follwing:

Season [season#] at the end of the directory name, file name starts with [episode#]

I'm not that good in C# but it seems there is no regex for that case in NamingOptions.cs (https://github.com/M...amingOptions.cs), so you should add something like:

And some test methods in https://github.com/M...eNumberTests.cs

I thought we removed that convention because it caused problems with episode titles like "12 Angry Men"...

Ok yes, my mistake. It seems we don't have a regex to cover this scenario.  @cloudstriker83, your regex sample does work, but can you tweak it a little to handle these failing tests

In both cases the episode number is being detected as 12. Thanks.

In both cases the episode number is being detected as 12. Thanks.

I'm not sure if the regex is wrong. Maybe it has something to do with the following “Group 3” (see below). Or with the isOptimistic, isNamed options. Or maybe the new regex that is checked before does already match so the new one isn't checked at all (try putting the new regex to the top of the array just to see if it's an order problem). Sorry, but I don't have an Emby dev enviroment running to simply play along with the settings.

Thanks for the info.

Also tagged with one or more of these keywords: tv, episode, naming, filename